All major newspapers / magazines have covered Astrologer & Numerologist Dr. PR Sundhar Raja's predictions. Clicking the below Links will lead you to the respective section 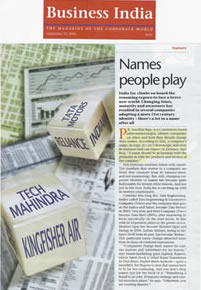 India Inc climbs on board the renaming express to face a brave new world. Changing times, maturity and awareness has resulted in several companies adopting a more 21st century identity - theres a lot in a name after all.

P.R.Sundhar Raja, is a Coimbatore-based astro-numerologist, advises companies on when and how they should change their names. According to him, a companys name, its logo, its CEOs horoscope, and even its business card can impact its fortunes. Says Raja, "A name should be in harmony with the promoter or with the products and services of the company"....

He detested astrology for the misfortune it brought to his family in childhood, but then he took a closer look and realised that charlatans misuse it. He now combines astrology, palmistry, numerology and graphology to advice his clients on how to alter the variables and better their destiny. "A persons birthday is fixed but his name is not," he points out.

Raja's clients are the rich and famous. He (re)designs logos for companies with flagging fortunes, knocking off the thorny aspects and sufffocating enclosures, and says it sets the companies sailing again. Graphic artists are hired for the jo

Samples are shown where a minor swish of whiting opened up a suffocating circle in a logo, and another where he turned barb-like arrowheads away from the logo and effected changes in their performance. Raja's charges vary with different services, like name tuning, signature tuning, redesigning logo and personal advice.

Raja says, "My fees cover the overheads. I have saved enough for a comfortable life." From plush hotel suites he advises his lofty clients. Among them is a Mumbai tycoon, a tea major from the east and a major battery company, but he does not want their names to be published.

Fraudulent accounting, improper management and external pressures have all been blamed. Those factors may have accelerated the downfall, but it's all in the name, according to PR Sundhar Raja, an astro-nameologist.

He confirms, "You can't change the date or the time of your birth, but you can change the name". "Thinking about the name carefully is like taking vitamins to prevent illnesses rather than taking a Coldarin after catching a cold, which is what people try to do with vaastu".

If Enron had taken care with its logo, it may still be around, he says. The 'Enron name is good but the logo-an 'E' tilted backward with the name pointing down - is all-wrong, Sundhar says.

"Anyone who saw that logo, including the employees who walked past it everyday, preceived it to be going down - and images are very powerful and stay in the mind", says 41 year-old Sundhar who developed an interest in astrology early. As the seventh born after six girls, his mother would check his horoscope even if he sneezed, he says.

Convinced that his ability in astrology and numerology can be used for the benefit of society, Sundhar has special interest in Corporate houses, and closely studies how a company's name, logo, its CEO's horoscope, and even its business card can impact its fortunes.

In the case of WorldCom, while the name is good, the logo has a line above the name that fades to the right; that he says signifies the fading of the future of the company. In the case of Tata Finance, the logo was closed, locking the company in, with the heavier-looking Tata name on top of it. So there were no prospects for growth, Sundhar says.

In the case of Andersen, while the name and logo are fine, the fortunes of the company was linked closely with the CEO's, who may have had a bad horoscope, suggests Sundar.

When powerful leaders-including political leaders - go down, they pull their companies and those around them down as well, says Sundhar, who has also written a book titled, "The power of your Name".

This is true in the case of Kmart as well, whose name adds up to 13, denoting a sudden fall, and whose former chief executive, Charles Conaway, may face charges.

Sundhar typically makes an astrological chart for a company using the day of its registration as its birth. Each company has a lifespan, he says, and its good and bad patches, but also needs to constantly rejuvenate itself.

The new Tata logo - which points outward, suggesting movement and growth - and the logos for Arrow, American Express and Coca-Cola are examples of good logo designs, Sundhar says.

Brands names, again, must be chosen with care, and the name must be in harmony with the product or service that the company offers.

While the logo is a very important part of the company, typically only the aesthetics of the design is considered; companies rarely think of the science behind the design, Sundhar says. But even the house colour has an effect on the work environment, and therefore on the employees. "There should be greater awareness at the concept stage - that will save a lot of money and effort." Sundhar says.

A Change of name

AAH, that extra a. The key to a successful business, a faster car, a better marriage.

Numerologists believe they can fine-tune your name to vibrate in harmony with your birthday and bring you luck. PR Sundhar Raja, an astro - numerologist says, "We cant alter birth but we can definitely modify names to bring success."

Ramaraj, who changed his name, believes in this mantra. This management person was all set to establish his own company, the loan details had been worked out and all he needed to do was sign on the dotted line. Or, as Ramaraj says, that is the impression he was given.

The loan application backfired and a desperate Ramaraj was intent on leaving town. At least until he met Sundhar and had his name fine-tuned. Now Ramaraj goes by the name Raj.

Raj believes the change has worked for the better. After struggling to get the loan through for five months, things just fell in place after the name change. Now, Raj does not believe that it was a coincidence that things worked out.

"People who were giving me a hard time till then changed. Suddenly, everything seemed to fall in place," he says with earnestness.

In the first week of the change, Raj wrote his new name down 40 times a day. Sundhar insists this is essential for internalising the change. He also advises family and friends to call the person by the new spelling.

Sundhar looks at both the birth chart, the birth number and destiny number before he decides to go in for a name change.

"At most times, the changes are small. But when the name just does not vibrate with the horoscope, the entire name has to be changed," says Sundhar.

Name vibrations could change your life: A change in the name can bring a change in fortunes for a company.

The vibrations of a person's name have the power to change the course of the person's life. Making a few alterations in the name of the company can revive the flagging fortunes of a company.

PR Sundhar Raja is a leading expert in Nameology. The American Space agency NASA has also acknowledged his input.

The Path To Success

A person's name is the key identifying feature by which he is known in this world. The success of a person is in his name. You cannot change the date of your birth, but you can always have a name that is in harmony to give you success.

A complete benefit could be gained when the name is chosen considering the horoscope.

Success In The Business

Minor alterations in the name can bring about a revival in the fortunes of a company. Similarly, the logo of the company should also be in tune with the company's name to succeed.

Mr.PR Sundhar Raja also suggested that if the name of our country "India" is changed to "Bharat", the country would soon achieve economic prosperity and there by reduce poverty.

Mr. PR Sundhar Raja also said that a child's name is very important for their future to be successful. Using Astrology/Numerology, the right career for a child can be determined and the child should be encouraged to take the right type of education at the initial stage itself.

Finally, Mr.PR Sundhar Raja informed that even if the date of birth is unlucky for a person, a lucky name could be chosen so that the person can succeed in life 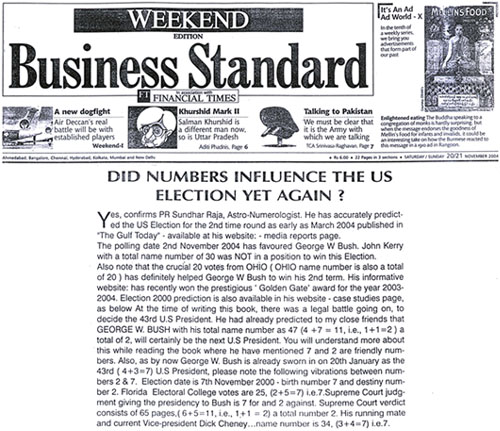 All major newspapers / magazines have covered Astrologer & Numerologist Dr. PR Sundhar Raja's predictions and you can click on the link below to read the articles.View more